Let's look at another person who became an entrepreneur and a very successful investor in the global tech industry. He is also a keynote Motivational speaker. 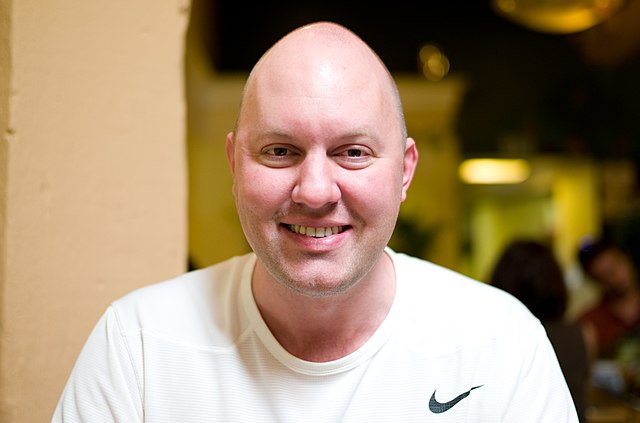 Marc Lowell Andreessen was born in Iowa on 9th July 1971 and he was brought up in New Lisbon, Wisconsin. His mother - Patricia was working with the mail-order giant, Lands' End and his Father Lowell was an agriculturist working in a seed company.

Marc is a computer genius.

He spent his early life reading and learning about computers. While he was in the sixth grade he developed his first computer program - a virtual calculator to do his math homework. Unfortunately, he lost the program on school computers due to power outages.

His parents bought him a computer so that he could learn more about computer programming.

Marc wanted to develop computer games for his new PC. He learned BASIC programming from the library books. He was a bright student known to challenge even his school teacher on the relevance of their assignments.

Gave Netscape to the world

He later along with Jim Clark founded a company - Mosaic Communication Corp. He worked on developing the Mosaic software to make it faster and interactive. However, the NCSA which owned the copyright for the Mosaic objected and they changed the same to 'Netscape'.

Marc cofounded the famous internet browser called "Netscape Navigator" which simplified the way to browse the internet. Marc was very successful in not only earning money but also competing with a huge rival - Microsoft.

The Netscape Navigator became quite popular. It was the first browser to include JavaScript capabilities. As a result, 24-year-old Marc's net worth increased to $50 million.

When Microsoft launched Windows 95 and included its own browser - Internet Explorer. The market share of Netscape Navigator decreased by 60% to sales of around $450 million.

Marc who worked as Senior Vice President later quit Netscape after it was acquired by America Online (AOL) in 1998 for $4.2 billion. Marc worked with the new company - AOL as Chief Technology Officer for another year and quit.

He returned to California and later co-founded Opsware originally named Loudcloud along with Ben Horowitz, Tim Howes, and In Sik Rhee.

Loudcloud was one of the first companies to provide Software as a service (Saas) and to attempt cloud hosting. It provided hosting and software services to major e-commerce companies. Later in the year 2007, it was acquired by Hewlett-Packard for $1.6 billion.

Laura is the founder of the Silicon Valley Social Venture Fund and daughter of Silicon Valley real estate billionaire John Arrillaga. They have one son together.

Later, Marc and his longtime business partner Ben Horowitz separately invested around $80 million in 45 start-ups that included Twitter and Qik.

Marc serves on the board of Facebook, Hewlett Packard Enterprise, and many other successful companies. He advises the leaders of companies in which Andreessen Horowitz invests, including Mark Zuckerberg of Facebook and Mark Pincus of Zynga.

Andressen and Horowitz feature 1st on CNET's 2011 most influential investors list. He is also recognized as Tech's Top Investors in the 2012 Forbes Midas List.

Marc is named as one of the most influential people in the world by TIME 100. He is also been awarded Queen Elizabeth Prize for Engineering.

Having courage means not giving up in the face of adversity. work towards becoming a genius. But it is equally important to work on having courage. There is a need for a magic combination of genius and courage.

Courage without genius might not get you where you need to go, but genius without courage almost certainly won’t.

2. Be Determined to Succeed.

Failure is a horrible thing, as Marc said, and so we are all biased towards people who are really determined to achieve success. It is important to not consider failure as an option but rather to be determined to get success.

Failures are good’, ‘Failures teach you’, etc., We don’t buy anything like that. We think that to be complete nonsense.

3. Make a product that a lot of people want.

Only when you have a product that is market fit should you could start exploring business strategy, marketing, expansion, etc.

4. Having the right idea and having it at the right time.

Most of the novice entrepreneurs are too ambitious and too aggressive to expect that something will happen in the market, quicker than it's really going to. Such high optimism can make a business fall apart. But sometimes we see, six years later, another business with the very same concept gets a big success. Why? There is no reason for it. It's simply timing.

Successful entrepreneurs have patience and are able to judge the timing perfectly.

Established businesses are typically pretty good at what they do and so for the new company, it not only has to bring a product to the market to exist but bring something much more than that exists, to break through the status quo.

6. Be so good that they can’t ignore you.

As per Marc, whether you're just starting out with your career or trying to get to the next level, your aim should be to master your craft to the point that people can't help but notice

What should you do so that people can't help but notice you?

The level of discipline and rigor and practice that you put in your work should be astonishing. All you have to do is work hard, trust your product, apply the right marketing approach a step at a time.

With such discipline and hard work, you would definitely see a sudden success one day.

8. Prevent mediocrity from creeping in.

There could be 100 people around you with the same abilities, but you have to train those associated with you.

I think the development, career path, skills trainings is going to be such a more fundamental part of how the economy works, and I think it has to be.

Average workers should not be promoted simply because they need to be promoted. Only deserving people should be hired or promoted. In the words of Marc, it brings in mediocrity in the organization -

Most of the entrepreneurs with radical ideas are not coachable. But it is important to give thought to other ways of doing the same thing. Successful entrepreneurs are open to ideas and also go through the "idea maze".

10. Have time for everything you have to do.

Marc considers having time for everything. The meetings, sleep, free time.

Free time is critical because that’s the release valve. You can work full tilt for a long time as long as you know you have actual time for yourself coming up. I find if you don’t schedule enough free time, you get resentful of your own calendar.

11. Respect the people you work with.

In a recent interview with CNBC, Marc said -

We had decided one of the values of the firm is respect for the people we work with. And part of that respect is — we don’t drop balls.

12. Have a commitment to work.

In the same interview, Marc also said he values commitment.

If you contact us, you’re going to get a response. If we commit to doing something, we’re going to do that thing. It was just a necessity to be able to have some sort of system.

Hope the article was quite motivating. I would appreciate it if you take a second and share this article with your friends. Have a great day!!!