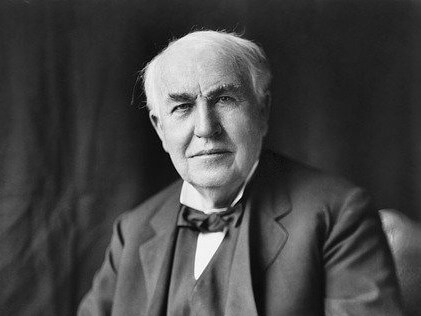 The great scientist of the 19th century whose positive thinking changed the world. According to Thomas Edison, Our biggest weakness is giving up. The simplest way to achieve success is to try once again and keep trying.

Today, everyone knows Thomas Alva Edison as a great scientist. During his lifetime, he made many inventions such as the electric bulb, the machine which worked on steam, he turned it into the machine that used electric power. The gramophone is also an invention of Thomas Edison. Apart from this, Thomas Edison surprised the world by making many inventions. He made a world record by making 1093 inventions in his entire lifetime.

Making so many inventions is just one aspect of his life. Today, we will know about his exemplary positive thinking. If we adopt his ideas then no one can stop us from being successful.

Thomas Alva Edison was born in America in 1847. Thomas Edison was the youngest of seven brothers and sisters to father Samuel Edison and mother Nancy Eliot. When Edison was seven years old, his family relocated to Port Huron, Michigan.

When Thomas Edison was 2 years old, his parents got him admitted to a school. But after a few days, the parents started getting complaints from the school. He used to ask such questions to his teachers that they were not having any answers. His questions were such that if the birds can fly in the air then why can't a man.

He was very curious since childhood. He was trying to find a reason behind everything. Whatever he knew or thought, he used to start his experiments on that subject. Because of this, people used to call him a retard. But he kept himself busy in his experiments without caring about what the people thought.

He once heard from people that the bird ate worms and that birds started flying. He deduced that if man ate worms, he would be able to fly. Thomas gathered some worms and beetles and ground them into a paste. He made his friend drink the solution after mixing water into the paste. Due to severe stomach ache, she began to swirl on the ground. She somehow survived. But this brought Edison's idea of flying to a screeching halt. This made people angry and he was severely beaten up, criticized.

Edison's official education was limited as a child, with only a few months of schooling.

One day when he came back home from school and handed his mother a letter given by his teacher. Edison asked - "Mom, my teacher gave me this letter with the instruction that only you should read it. Could you please read what is written in the letter?"

"Your boy is a genius," she read aloud, her eyes welling up with tears. This school is too small for him, and there aren't enough qualified teachers to train him. Please teach him on your own."

His mother became so furious that she decided to take him out of school and tutor him at home.

His mother taught him elementary science. By which he learned to do chemistry experiments at home.

Edison made his first laboratory at home at the age of 10. But after a few days, his mother got angry with his new experiments and she threw all his instruments out.

In search of professional success

In dire need of money to open his new laboratory, Edison started selling tickets and newspapers to railway passengers.

At the age of only 15, Thomas Edison started printing and publishing his newspaper "Grand Trunk Herald" and started selling it himself on a moving train and after working all day, he used to spend the rest of the time in the laboratory.

Edison had also built his own laboratory temporarily in an empty train compartment.

Once when he was doing a chemical experiment, a substance called Phosphorus, which had been stored on the upper shelf, fell and caught fire. The people in the train were terrified. The train guard arrived shortly after and inquired about the event.

The fire was put out, but the security guard got angry and slapped Edison many times and pulled him by his ear, and threw him out of the train.

After that, he threw Thomas's laboratory, shop, newspapers, and other items out of the train one by one.

Thomas's whole collection of equipment and instruments was thrown outside. Furthermore, the guard's slaps hurt Thomas's left ear, making him much deafer than before.

After this incident, Edison could not hear properly and gradually his hearing ability began to decline.

Edison was so positive thinking that he felt that from now on he would not have to hear useless things and he would focus more on his work.

Later, Thomas started working as a telegrapher in railways. He was spending the rest of the time in his laboratory.

With time, despite the ups and downs in his life, Thomas Alva Edison became a great scientist and started inventing. 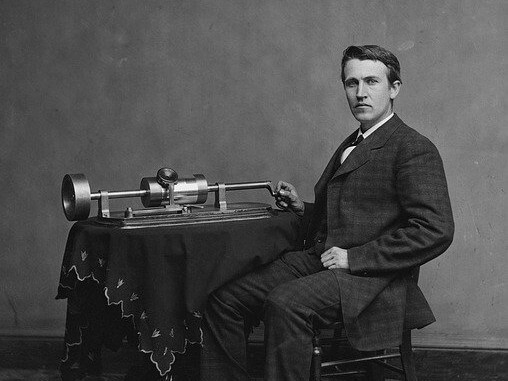 Edison's first invention was his stock printer which Edison was successful in selling. There is an interesting story associated with it. when Edison realized that his invention cost US$5,000 he was ready to sell it for $3000. But later it was sold for $40,000.

In today's date, its value is about $750,000. During that time it was a huge sum of money someone would earn. Edison's journey to success had started. He started inventing one thing after the other. the biggest invention he made is the invention of the electric bulb.

It was very difficult journey to success. Before achieving success, Thomas Alva Edison failed more than 10,000 times in making the electric bulb, but he was not disappointed. With his hard work and struggle, he invented the bulb at the age of about 32 and on 21 October 1883, the first bulb was glowing all day.

Thousands of people from far and wide started coming to see it because for the people it was nothing less than a miracle and when Edison was asked, how did you keep working without giving up even after falling more than 10000 times? "I have not been unsuccessful.", he stated. "But I have discovered 10,000 ways that don't work". He set an example for the entire humanity to never give up and move forward until victory is achieved.

One day when Edison was looking at his old memorabilia in his leisure time, he found an old letter in the corner of a cupboard. That was the same letter which was given by the teacher to his mother which brought tears to her eyes. She had read that Edison is smart and genius.

When Edison was reading the letter, his mother was longer in this world. Edison had also become a very big and great scientist and on getting such an old letter, he quickly wondered what else has been written about him. Edison eagerly opened it and read it, but after reading what was written in it, Edison started crying. It was written that -"Your son is mentality ill. We are no longer allowing him to attend our school. He's expelled".

Edison was in deep feelings. In his diary, he wrote: “Thomas A. Edison had a mental deficiency whose mother turned him into a genius of the Century.”

That is a lovely narrative that contains some truth. What really happened, according to Edison. He overheard a teacher informing the principal that Edison was 'addled,' that he was disoriented, and that keeping him in school was no longer worthwhile.

He burst out crying and ran home to tell his mother what had happened.

Then I realized what a good mother is. She informed the teacher that he didn't understand what he was talking about, that I was smarter than he was, and other such things. In fact, she was the most enthusiastic champion a boy had ever had, and Edison had resolved right then and there that he would prove himself worthy of her trust.

Everyone will have to leave this world one day and this is the universal truth. This great scientist Thomas Alva Edison left the world on October 18, 1931, and before leaving this world, he enlightened everyone.

Even during his last moments he said - "Everything there is very beautiful there". He was a person with an exemplary positive mindset. He never gave up, believed in himself and he never believed that he failed.

He never gave up in his entire life and believed in himself. He used to experiment for four or five days without sleep. There was no clock in his laboratory which allowed him to work without any time limits.

He often used to say that he never worked for a single day in his life. All that he did was just entertainment. But we all know that in his entertainment he left so many things for this world.

On his death, America's light was turned off for one whole day.

Conclusion of the story

What we learned from Thomas Edison is that we should never give up whatever be the problems. It is always worth trying one more time till you succeed. Have a great day!